Every (church) body needs a mission

During our recent Synod in Gent, one session dealt with the work of the so called Mission Working Party. A paper by Rev. Sam van Leer was among those presented for discussion and dealt with “church models and how to relate Christianity to a hostile culture”. According to the eminent missiologist [missiology is the study of the mission of the Church in the world] David Bosch, the current rise of anti-church sentiments is not just a fad. We have truly entered into a period fundamentally different from anything we have experienced so far. “It is secular, anthropocentric, consumerist, information- and entertainment-driven, morally permissive, impatient, and suspicious of any sort of grand vision”.

Sam then goes on to summarize the work of Tim Keller, founder of Redeemer Presbyterian Church in New York. Keller’s aim was to make various denominations aware of their own church-culture biases, without prescribing a model or form that will always fit. He then came up with 4 models, for each of which there is a certain amount of support in the Bible as well as in tradition. They have their own practical advantages and disadvantages. He defined these 4 models as: Two Kingdoms, Counter-cultural, Relevance and Transformationist. 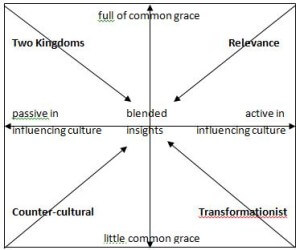 Where we stand, as individuals or Church, or where we wish to go, can be determined by asking just two questions:

A. Do we believe that God is only working through the (visible) church, or that the world and its cultures are also full of His goodness and grace?

Luther argued that God rules both the spiritual and the physical world. God’s light is shed on all (Romans 1 and 2), but is not universally perceived and understood. These “Two Kingdoms” exist in parallel, and though there are overlapping aspects, there must be no attempt to fuse the two. The only “true” kingdom work is to build up the church. But others, equally convinced by the extent of Gods work outside the church, insist on interaction between the two realms, which we call the “Relevance” model.

B. Are we passive or active in trying to influence the culture around us?

We could be passive (culturally speaking, that is) either because we believe that our “evil” culture can never be changed (by us) anyway, or because we believe that God is already active through it. This may lead either to a “Counter-cultural” attitude (setting an example but not getting involved), or a belief in two realms that can ‘peacefully’ exist side by side with no need for interaction.
On the active side of the scale we can either have a lively exchange of ideas and fashions, or we can have the ambition to transform an evil society. The latter model, chiefly inspired by Abraham Kuyper, advocates political and professional action to bring the world in line with the gospel. It emphasizes the Fall and the presence of death and sin that infect everything, which can only be remedied by Christ’s atoning sacrifice. There may be an over-emphasis on knowledge and doctrine in its evangelism, over-confidence in political power, and a neglect of sacramental and pastoral concerns.

So Keller argues that no single approach is always correct. They have to supplement each other. The big question is of course, where do I stand, and where does my local and wider church stand on this? What have we inherited, and what might be more helpful and authentic in our situation? As an established, institutional church, with a mixture of catholic and reformed influences, our approach seems to have been somewhere on the right side of the diagram. Bishop Stephen Sykes spoke of an Anglican “tendency to cozy up to power”. N.T. Wright has suggested that our access to power can also afford unparalleled mission potential. But relying on that might rob us of a more prophetic role. Keller forces us to reflect on whether our typical attitude is sufficiently counter-cultural.

[The complete paper by Sam van Leer, and others, can be obtained from Jaap]