The right conditions for healing

The other day, in one of our Wednesday evening Healing Services, we read the following text from St. Mark, chapter 6. “He left that place and came to his home town, and his disciples followed him. On the Sabbath he began to teach in the synagogue, and many who heard him were astounded. They said, ‘Where did this man get all this? What is this wisdom that has been given to him? What deeds of power are being done by his hands! Is not this the carpenter, the son of Mary and brother of James and Joses and Judas and Simon, and are not his sisters here with us?’ And they took offence at him. Then Jesus said to them, ‘Prophets are not without honour, except in their home town, and among their own kin, and in their own house.’ And he could do no deed of power there, except that he laid his hands on a few sick people and cured them. And he was amazed at their unbelief.”

During our meetings there is not usually much time to go into a particular text, but this reading can easily be misunderstood, so I wish to say a few things about it here. First of all it strikes us that even the power of Jesus to heal was limited by a lack of faith on the part of the people (although He was still able to cure some). This sure tells us something about the importance of faith. On the other hand it would be totally wrong and even cruel to suggest that illnesses that are not cured must stem from a lack of faith on the part of patients or those who pray for them. 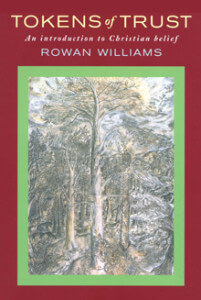 In his excellent book “Tokens of trust”, Rowan Williams points out that God is not like some clerk who receives a number of requests, marks some as acceptable and others as unworthy of following up and then hands the list to his celestial work force for further processing. In the fifth century St. Augustine already formulated a better definition of miracles. To him they were natural processes that were as it were “speeded up”. In other words, he did not see the natural and the supernatural as two competing realms. Nature itself was also intended to achieve God’s purposes, but sometimes circumstances or processes would resist them.

In the neighbourhood of Jesus the “door to God’s purposes” is always open wider, but even through Him God would never violate our freedom to cooperate or not to do so. Neither would He undermine His own laws of nature. For if he would, it would make for a universe we cannot depend on, and for human actions that would not be totally free. Since Rowan writes about a God who can be trusted, it is vital that He is seen as a God who is consistent. Now it is true that God can still move in mysterious ways, but not so as to constantly switch off the logic or energy in his own creation. And so there will and should be many natural factors that influence our health.

Going back to our text now, we find many other interesting elements. For instance, his audience first seems to acknowledge Jesus’ wisdom and deeds of power, but then they say to themselves, “No, this cannot be true. He is only a carpenter from around here”. Sometimes we start by having faith, but then it becomes so noisy in our head, that we lose this openness, to the point we can even take offence. The divine that can work through people near us, is somehow considered a threat. Jesus understands and explains what is happening, but is still amazed at this unbelief. This is partly because it goes against their own interest when people do not wish to be healed. But sometimes the ego is more powerful than one’s own needs, and will actually take self-destructive decisions.

In our society we can see this reflected in the way our health care works. So many therapies are competing each other, as if a particular system is more important than its source or results, or as if profits or reputation are the goal. But the same goes for spiritual systems and church organisations. Many of its advocates have lost sight of their true purpose and original openness to the Spirit of God.

Maybe it helps to realize that wholeness means that everything falls into place, everything gets its proper function, all forces of nature and culture and all strivings of the heart are recognized as servants of God, that “only” need to be directed and brought into harmony. Viewed in this way, not working together is an illness in itself, which prevents the cure of other illnesses. May we not only use our talents to the glory of God, but also allow and encourage others to use theirs, and work for that unity which is called health.