In today’s gospel story, James and John are lobbying to sit on the right and the left hand of Jesus in His Kingdom. In St. Luke’s version of the story, it is the mother of James and John who does the lobbying. Now in itself there is nothing wrong with wanting to be close to Jesus or wanting your children to be close to Jesus, but Jesus immediately spots the ulterior motive: they are after authority. By becoming the personal assistants of the Messiah, they could have things their way. A modern manager might have been glad with such ambitious and loyal assistants. But they misunderstood the nature of the Kingdom of God. While asking to be closer to Jesus, they were in fact moving further away from everything He stood for. “Whoever wants to be great among you, must be your servant”. Jesus himself was setting the ultimate example, as we are also reminded in the reading from the book of Hebrews.

Still, this whole concept of being servants would remain a difficult concept even in the history of the Church. How to organise this “diaconate” when there also seems to be a need for hierarchical leadership? Well, I don’t think the answer is in any particular way of organising things, but in keeping in mind what the rules are meant to achieve. As long as everything serves to take other people seriously and help them to grow spiritually without forcing them in a particular direction, then we may be contributing to the Kingdom of God. Otherwise we may actually find ourselves obscuring the Kingdom of God.

The way of Christ as key

The gospel reading offers us an important clue as to what the Kingdom is all about and what it takes to be able to serve. The word “baptism” is mentioned 6 times. “Can you be baptised with the baptism I am baptised with?”, Jesus asks. He was referring to the trials He faced and which we will face also, when we follow him. Life isn’t always easy, especially when we try to treat others the way we would like to be treated, with understanding and forgiveness. The suffering we go through can be like a life-long baptism. Hopefully each experience makes us a better person. But this does not make our initial baptism and confirmation less important, the time when we promised to reject the devil and his works and follow Jesus. We may have been a little shy or a little overconfident, but it was none the less a crucial step. Like James and John who said, “Oh, yes, we can drink the cup you drink”. However, they would turn out to be fine disciples eventually. Which means there is hope for us as well.

Baptism and confirmation are times when God says to us, ”You are my son” or “you are my daughter”. It doesn’t really matter if we are “adopted” children or ones that wandered away and then returned, like the prodigal son in the parable. When we give up our pride and turn to Jesus, that’s when we publicly become God’s children. Jesus had to follow the same path. When He was baptised, there was a similar voice, remember? saying, “This is my Son, whom I love; with him I am well pleased” (Matt. 3:17).

I find it very interesting that the book of Hebrews makes a connection between sonship and priesthood. A priest is someone who directly communicates with God. Well, sons and daughters have this kind of direct access to their father. When that father is God, his sons and daughters can act like priests. This is what Martin Luther called the priesthood of all believers. Jesus encouraged all his followers to pray directly to the Father. It is right there, isn’t it, at the beginning of the Lords prayer, which we use all the time.

In the book of Revelation, chapter 1:5,6, the existence of such a “large” priesthood is confirmed. It says that “Jesus Christ… the firstborn from the dead… has made us to be a kingdom and priests to serve his God and Father”. This is not part of any visions about the future. The visions only start in verse 9. This statement is part of the introduction of the letter. So our priesthood is a present reality, a consequence of being sons and daughters of God. It started when we were baptised, making the sacrament of baptism somewhat like a double sacrament. 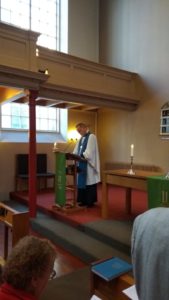 Jacob Theunisz delivering this sermon in the Lutheran Church in Zwolle, Sunday 21 October 2018.

Now why is this so important, you may ask. We have delegated the role of priest to our professional clergy, haven’t we? They can do a much better job consulting God and bringing others into the fold, right? Well, of course not every believer can be a chaplain or a pastor. But it would be a great loss to forego our heritage of being sons and daughters of God, welcome in Gods house, in that spiritual temple, serving and knowing God, yes, being intimate with God. The prophet Joel said, “afterward, I will pour my Spirit on all people. Your sons and daughters will prophesy, your old men will dream dreams, your young men will see visions”. And guess how chapter 8 of the book of Hebrews describes the new covenant: “No longer will they teach their neighbour, or say to one another, ‘Know the Lord,’ because they will all know me, from the least of them to the greatest.” When did the new covenant start? It started with Jesus. So again, this is not a vision for the far future. This is what God wants his people to be like right now.

Did you notice that it says, “from the least of them to the greatest”? This means that this relationship with God, this priesthood, is the great equaliser. Once you grasp its message, it no longer matters whether you are great or small, a leader or a so-called “lay” member. You will no longer desire to cheat or manipulate others to get higher up the social or the ecclesiastical ladder. You will no longer lobby and do everything to get your way or to remain in power. You may even begin to trust your fellow-believers and leave some decisions and responsibilities to them. You will enable and encourage others when they are disappointed, rather than digressing on your own accomplishments and stories and status.

I would like to close with an image from Revelation, chapter 3. Jesus says that those who are victorious, will be allowed to sit with him on his throne, just as he was victorious and sat down with his father on his throne. So there is this one throne, with, in the end, many people sitting on it. Let me ask you, what is the distance between those many people sitting in the same chair? That’s right, there is no distance! Here we find no left or right, no VIP seats, no front rows and back rows. This is because Christ, our High Priest, gave himself for each one of us. “For he did not come to be served, but to serve”. If this is our destination as well, we better start practising. It is not a matter of demeaning ourselves, but about genuinely considering all people as precious and equally valuable and worthy of respect.

So the order of Melchizedek is not just a fancy name for a single, albeit divine priest. Neither does it have any signs saying “theologians only”. It is the community of the faithful and a charter of equality and mutual respect. It could be the solution to our many squabbles and factions, because all polarisations are but expressions of this one failure to believe in equality. Fortunately no one needs to take this honour of being priests of the Most High upon him- or herself. We already received it from God when we were baptised. Thanks to Christ, everything has already been arranged. All we need to do is trust, be grateful and take our calling seriously.

Every high priest is selected from among the people and is appointed to represent the people in matters related to God, to offer gifts and sacrifices for sins. 2 He is able to deal gently with those who are ignorant and are going astray, since he himself is subject to weakness. 3 This is why he has to offer sacrifices for his own sins, as well as for the sins of the people. 4 And no one takes this honour on himself, but he receives it when called by God, just as Aaron was.

5 In the same way, Christ did not take on himself the glory of becoming a high priest. But God said to him,
“You are my Son;
today I have become your Father.”[a]

6 And he says in another place,
“You are a priest forever,
in the order of Melchizedek.”[b]

7 During the days of Jesus’ life on earth, he offered up prayers and petitions with fervent cries and tears to the one who could save him from death, and he was heard because of his reverent submission. 8 Son though he was, he learned obedience from what he suffered 9 and, once made perfect, he became the source of eternal salvation for all who obey him 10 and was designated by God to be high priest in the order of Melchizedek.

The Request of James and John

35 Then James and John, the sons of Zebedee, came to him. “Teacher,” they said, “we want you to do for us whatever we ask.”
36 “What do you want me to do for you?” he asked.
37 They replied, “Let one of us sit at your right and the other at your left in your glory.”
38 “You don’t know what you are asking,” Jesus said. “Can you drink the cup I drink or be baptized with the baptism I am baptized with?”
39 “We can,” they answered.
Jesus said to them, “You will drink the cup I drink and be baptized with the baptism I am baptized with, 40 but to sit at my right or left is not for me to grant. These places belong to those for whom they have been prepared.”

41 When the ten heard about this, they became indignant with James and John. 42 Jesus called them together and said, “You know that those who are regarded as rulers of the Gentiles lord it over them, and their high officials exercise authority over them. 43 Not so with you. Instead, whoever wants to become great among you must be your servant, 44 and whoever wants to be first must be slave of all. 45 For even the Son of Man did not come to be served, but to serve, and to give his life as a ransom for many.”