On the meaning and benefits of blessing

The words “blessing” and “to bless” are used a lot in Church, and in a variety of meanings. But what is the essence of these concepts, and where do they come from? The English word “blessing” comes from the old Teutonic (Germanic) word ‘bletsian’, meaning “blood sacrifice”. But its meaning changed when it was used as the English translation of the New Testament Greek word “eulogia”, meaning “good words about something or someone”, i.e. “praises”. The reason why “eulogia” was hard to translate was that the word itself is very uncommon in classical Greek. It was in turn a translation of the Hebrew word baw-rahk’, which means to kneel or to worship.

From this, it gradually becomes clear that blessing was originally an act of praising and worshipping God. We still use it in that sense. “Blessed be God for ever” we say just before the Eucharistic prayer. In heathen times, the idea was that the gods would bestow favours on the people when the people worshipped them (speaking well of them, kneeling or bringing sacrifices). The corresponding Latin word, by the way, is “benedicite”, from which we have our  “benediction”.

But the favours coming from God were also called blessings. Right after He finished creating heaven and earth, God said that it was good. This was nothing less than the first blessing. The Word which had given rise to all visible and invisible things, was heard again, this time adding prosperity. It was God who invented the idea of blessing. So our worship is, or should be, a response to His blessings, rather than a way to obtain them. This realization marked an important step in the evolution of religion, namely away from “magical thinking”, which had tried to control God by invoking His name and performing certain rituals. 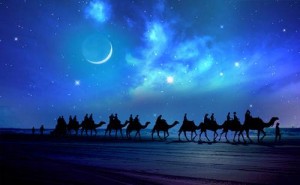 When fathers blessed their sons, they were doing so on behalf of the God who wishes us well. The opposite of a blessing is a curse, and we never find God cursing His creation or His people, not even when the people needed to be disciplined. It is amazing to find that God is, in a way, worshipping His children. We also know from psychology, that speaking well of someone, praising them, does so much more to encourage and support than a critical and condemning attitude. When we say that judgement belongs to our God, it is because the judgement is safe in the hands of Him who likes to bless and whose mercy never ends.

A very special blessing was given to Abraham. Abraham himself would become a great blessing to many. God would speak well of (bless) those who would speak well of (bless) Abraham. His name would be made great in the same way as Abraham had magnified God. In a covenant, the fate of two parties becomes connected. Their prosperity depends to a large extent on how they treat and talk about one another. And indeed, how much is ruined by gossip and slander. Even when we have our differences, we should always try to remember the good things that everyone possesses. Blessing things and people (speaking well of them or wishing well) should become an attitude like it seems to be the habitual attitude of God. I am not saying that it is always easy, but even when warning someone, we had better not focus on the blindness or depravity of that person, but on the possibilities for salvation, reconciliation and peace.

Dr. Masaru Emoto has shown that water molecules form different patterns according to the words spoken in their vicinity and to the kind of music that was playing nearby. They reflected the good or bad “vibes”. And then to think that for 90% we consist of water! Other studies have shown that food which has been blessed does more for our health than food which has not been blessed. In this way we can all profoundly influence our environment and ourselves by thinking positive thoughts and speaking positive words. The effect is bound to be even greater when we do not just bless something or someone, but ask God to bless it for us or with us. The Dutch word “zegenen” clarifies this a bit more. It comes from the Latin “signum” (sign of the cross). It reminds us that we only make a gesture, and the cross, the love of God, does the actual work. It also reminds us that blessings are not about words only.

In the Old Testament special blessings could only be given by special people. They represented God when they pronounced such blessings. The beautiful High Priestly blessing in Numbers 6:22-27 was an example. In the Anglican Church certain liturgical and sacramental blessings, as well as the absolution, can only be given by a priest. But notice how, grammatically speaking, the High Priestly blessing is entirely in the subjunctive mood. This means that it expresses a wish for God to bless us – it is a petition, rather than a declaration of the blessing itself. In English this can be expressed in one of two ways. The translation either says, “The Lord make His face shine upon you” (in stead of “makes” or “will make”) or it says, “May the Lord make his face shine upon you”.

Readers and other non-ordained ministers are always supposed to say “us” in stead of “you” and to use the subjunctive mood when it comes to a blessing or an absolution. I have no problem with this at all, for three reasons. Firstly, the most beautiful blessing, the High Priestly one, is already in the subjunctive mood. Secondly, the word “us” means that I am blessed as well and not just the rest of the congregation. Thirdly, desiring that God Himself will bless you and me is the best thing we can wish for and pray for and therefore the best blessing content-wise.

One final remark. Verbal blessings and prayers should be accompanied by an attitude of wishing well for others and for ourselves. Then the opportunities to bless and be a blessing will be limitless. May we create, recognize and use these opportunities. And may the Lord bless us all!