Reforms and limitations of Vatican II

In 1964 The Roman Catholic Church held the Second Vatican Council and adopted a new dogmatic constitution dealing with how the Church understood itself, in other words about its ecclesiology. I was only seven at the time and completely unaware of its implications, for other churches as well. The constitution was called Lumen Gentium, Light of the Nations, a reference to Christ.

The three most outstanding accomplishments, according to the Australian Anglican priest Charles Sherlock, teacher of theology and liturgy and member of ARCIC (the Anglican – Roman Catholic consultations) since 1991, were the abandonment of the Latin Mass, the introduction of a three-year lectionary, which idea was adopted by the Anglican Churches, and the opening up of ecumenical and interfaith relationships.[1] Rev. Paul Avis, hon. professor of theology at Exeter and chaplain to HM the Queen, wrote in 2014,[2] “As Benedict had said, true reform involves both continuity and discontinuity. But where to put the emphasis remains hotly debated. […]The Council has also had an enormous impact on Anglicanism, especially on the Anglican understanding of the Church, its liturgy, ministry, mission, and approach to Christian unity.” For what actually changed in the understanding of ministry and mission (in both churches), we have to delve deeper. 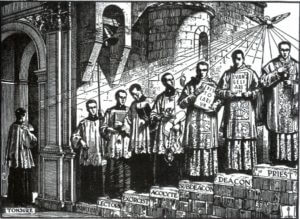 According to traditional Catholics,[3] the Roman Church has virtually always had a system with 7 orders, leading up to the priesthood. This arrangement may have spanned 1800 years, namely from the time of pope Soter (174 AD) or earlier, to the implementation of Vatican II in 1972. The number of orders was without a doubt chosen for symbolical reasons, 7 being the number of perfection. Some of the stages would in due time become a formality. However, it is important to realize how young the current system with only 2 orders actually is. One of “my” chaplains told me in 2016 that he had been the last one in the Old Catholic Church in Germany to be ordained to all 7 steps to the priesthood. The system had been defended at the Council of Trent, which was an answer to the Reformation. Then hundreds of years later, in 1964, the Church presented a new, rather late and totally different, response to the Reformation and to practices developed in the churches of the Reformation.

At first this response may seem like a simplification, but the terms clergy, order and ministry no longer had a 1:1 correspondence, which has led to much confusion. Some clergy have therefore suggested avoiding the word “minister” altogether, because for an ordained minister it means too little and for a lay minister the connotation may be too strong.

The minor orders did not completely disappear, but were now part of the laity and were no longer meant to automatically lead to the priesthood. This may help to understand the sometimes allergical reactions when a Reader (lector)[4] shows a vocation for the priesthood. In the Anglican Church there is now often too much emphasis on the office of Reader being an end station, thus overcompensating for the old one-way track into the priesthood. Exorcism became a specialty of certain appointed priests. 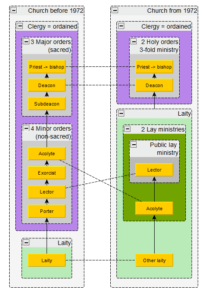 I have summarized the changes in the diagram on the right. Although the role of the laity seemed to vastly increase, this was only achieved by redefining the laity to include some former clerical orders, i.e. skipping their ordination. The diaconate, with the exception of a relatively small number of “permanent deacons”, has still not been reformed in the way that the minor orders have, that is to say, it still tends to be a formality leading up to the actual priesthood. I will later discuss the odd position of “permanent deacons”.[5]

Although the formal distance between the clergy and the laity may not have increased (it was considerable and has remained considerable), the dividing line now seems more arbitrary, resulting in increased friction. Protestants usually oppose the ordination of ministers in secular employment because it reeks of (old fashioned) Catholicism. Most Catholic clergy oppose it for other reasons, including compliance to Vatican II, and preserving the exclusivity of their professional full time ministry.

This attitude remains even as some ministers in secular employment are ordained and as it is admitted that ministers in secular employment provide a necessary connection between the Church and everyday society (schools, the office, the work floor). “Yes, but the ones ordained are not lay ministers”. “No, but they would have been, if they had not been ordained”. A very strange and selective approach! As long as synods have a separate House of Clergy and House of Laity, and Anglican clergy have regional clergy meetings where representatives of the laity are not invited, although individual parishes are discussed, the desired “connection” between the “Church” (read: the clergy) and ordinary society may never thrive. A first step could be to ordain all those who now exercise a “public lay ministry”. The largely failed attempts to create an Anglican “local ordained minister” category, are not proof that such a recognition of “other” ministries is impossible. It is only proof of those attempts not being bold enough.

Also, it should be noted that the Roman Church officially still considers clergy of other denominations to be part of the laity. Such orders were declared invalid (“null and void”) by at least 7 popes, including Pope Leo XIII (Encyclical Satis Cognitum, 1896) and Pius XII (Instruction De Motione Oecumenica on the Ecumenical Movement, 1949). In 2017, however, Curial Cardinal Francesco Coccopalmerio declared that we “need to move beyond looking at sacraments so rigidly as only either valid or invalid.”[6] The idea is that the validity of sacraments depends on the context. This is rather ambiguous and could just mean that an order may be considered valid in the context of the Anglican Church, but still not valid in the context of the Roman Church.

The very existence of these discussions illustrates how the term “laity” functions as a kind of container concept for everything that has reduced validity. Such discussions also illustrate how the identity of churches is apparently derived from (regulations concerning) her ordained leadership, not from her faith in Jesus Christ as the head of the Church, or from the people in which we are asked to recognise Him. This is a cardinal (pun intended) mistake. As I have said elsewhere, if there is any ministry, it is meant to do what its name suggests, namely serve.

It is true that there is a need for spiritual leadership and professional problem solving, perhaps even for a hierarchy of paid and unpaid leaders. In order to satisfy different tastes and preferences there may also be different ways of organising “church”. What does not help, however, are endless (expensive) debates or categorical divisions such as “clergy” and “laity”. Unfortunately, for all its merits, Vatican II has done little to end those debates and divisions. It may even have intensified them, but without many concrete results.

In the area of ecumenism, for instance, there have been various “gestures” like the pope giving his episcopal ring or a chalice to the Archbishop of Canterbury or creating pairs of bishops to engage in joint mission. But otherwise we only find fairly abstract language like “The group continued its exploration of contemporary and historic ordination rites, considered more deeply questions arising from Apostolicae Curae and Saepius Officio (both in relationship to the context of the original Malines Conversations, and within the framework of subsequent developments in both communions), reflected on the riches to be shared in future thinking about the life of the Church, and discerned mutual learning about priesthood and ministry in a shared late modern context.”[7]

50 years ago, Fr. Tony Currer of the Pontifical Council for the Promotion of Christian Unity, had said, “Theology needs to catch up and find the theological underpinnings to these gestures”. However, it remains unclear if these underpinnings were ever found in the past 50 years or even can be found. After all, theology does not start with gestures, but with the Word of God. Anything else would be eisegesis, making Scripture say things. The best way to bring two churches in line with one another, might be to reform them both.

Other reforms, such as the admission of women to the ordained ministry, were not the result of Vatican II. If they were, they would have occurred in the Roman Church first. The use of the vernacular in the liturgy was overdue, having been introduced by other churches before Vatican II. My conclusion can only be that the council introduced some important, but overdue, reforms and was, apart from that, overrated. It has distracted us, though, from another overdue reform, namely the re-unification of clergy and laity. The “ministries” which have replaced the minor orders, may well have made this task more complex instead of easier.

[4] Anglican Readers are not an order, but do follow a rule and are therefore sometimes compared to a monastic order. The “religious” are sometimes regarded as a third group next to the clergy and laity. Generally, though, Readers are regarded as part of the laity.

[5] It is claimed that Vatican II was only a start and would need to be followed up. Chapter 3 of Lumen Gentium mentions, “…the diaconate can in the future be restored as a proper and permanent rank of the hierarchy. It pertains to the competent territorial bodies of bishops, of one kind or another, with the approval of the Supreme Pontiff, to decide whether and where it is opportune for such deacons to be established for the care of souls. With the consent of the Roman Pontiff, this diaconate can, in the future, be conferred upon men of more mature age, even upon those living in the married state. It may also be conferred upon suitable young men, for whom the law of celibacy must remain intact”. However, permanent deacons are still an exception to the rule. This shows that it is much easier for the former major orders to reorganise the “laity” than to reorganise themselves.

[6] http://www.ncregister.com/daily-news/cardinal-coccopalmerio-explains-his-positions-on-catholics-in-irregular-uni in which the cardinal spoke of a “less rigid” understanding of the priesthood, one that essentially rejects an objective and metaphysical notion of priesthood in order to draw nearer to Protestants.
According to Christopher Lamb in The Tablet, Coccopalmerio characterized the Church’s teaching on the question of Anglican orders as follows: “We have had, and we still have a very rigid understanding of validity and invalidity: this is valid, and that is not valid. One should be able to say: ‘this is valid in a certain context, and that is valid another context’.” https://www.thecatholicthing.org/2017/05/18/the-truth-is-real-not-rigid/

[7] Report by the Vatican Radio about the “Malines Conversations Group” 2016, which included The Right Reverend Dr Geoffrey Rowell (former Bishop of Gibraltar in Europe and noted scholar of the nineteenth century and The Right Reverend David Hamid (co-Chair of IARCCUM and suffragan bishop in the Church of England Diocese of Gibraltar in Europe). http://en.radiovaticana.va/news/2016/04/26/anglicans_and_catholics_discuss_recognition_of_ministry_/1225707